This week I’ve been getting to know my new buddy the EV3. The LEGO MINDSTORM EV3 is a robot building set that includes hardware (the pieces used to build the robot), firmware (the programming in the brick, a sort-of microcomputer that connects to the robot to control it), and the programming software used to program the robot (Griffin, 2014, p. 3). A new educational EV3 package costs $390. Fortunately, since I have volunteered to help coach the First Lego League team at my sons’ school, I have been allowed to tinker with one of these beauties (an older generation EV3 kit) at home.

To help guide me on my first foray into LEGO robotics, I purchased two books, The Art of LEGO Mindstorms  EV3 Programming by Terry Griffin and Winning Design!: LEGO MINDSTORMS EV3 Design Patterns for Fun and Competition by James Jeffrey Trobaugh. I started by building the test robot in the Winning Design! Book  (Trobaugh pp. 183-259). It is the robot that you see in my video. Then, I really started digging into Griffin’s programming book. The EV3 has its own object-based programming environment. It is fairly easy to learn the basics, and I have found that the kids on the team haven’t had too much trouble putting together simple programs. While learning about programming, I am starting to turn my attention to how the EV3 can be used in education.

What can students learn from the EV3, really? It seems like most of the obvious answers have to do with learning how to use the technology rather than learning with the technology. You can learn how to build LEGO robots, and you can learn how to program them. You can also learn how to build simple machines as attachments. In the First Lego League competitions, you learn how to work collaboratively and also try to solve real-world problems (at least replications of them) with your robot and programming. While these projects are interesting and certainly not without their own merits, they are not particularly applicable to the classroom. There are actually a few classrooms at my sons’ school that have EV3’s in the classroom. How can we learn with the robots, rather than simply learning how to use them?

This brings us to Dr. Mishra andDr. Koehler’s point: Teaching with technology is a wicked problem. This concept was introduced to me in the video we watched for class this week (linked here). By wicked, we do not mean the problem is evil, but it is apparently impossible to solve given the wide number of known and unknown variables. So in order to tackle this wicked problem of teaching with the EV3, I tried the TPACK mash-up.

If you want to hear Dr. Mishra’s explanation of the mash-up you can see it in this video at around 39:00. Here is the gist: pick a standard at random, identify the problems of teaching the standard, and try to imagine ways your tool can be integrated. When evaluating my use of the tool to meet the standard, I tried to focus on ways that the EV3 can either provide an engaging lesson that will either provide a unique insight into the standard or push the student to apply higher-order thinking.

Using the site Random.org I created some randomized lists and picked five math or science standards for grades 4-8 at random. You can see the five standards that came up here. Of the five, I found the math standards particularly fruitful–this is most likely due to the fact that I work in middle school math intervention, so I am pretty familiar with common hang-ups and misconceptions that students have.

I know that one of the most important and challenging math standards for middle schoolers is CSS.MATH.7.RP.A.2: Recognize and represent proportional relationships between quantities. Ratios are so important to master in middle school math, but I have encountered many students who struggle to connect with the concept. Here is where my friend the EV3 can help.

There are a number of ways you can program motion with an EV3, most involve the use of sensors to look, listen, or feel for things in the environment. But the programmer can also give the robot basic motion instructions (go forward a certain distance, turn at a certain angle). These instructions can be given in terms of the time the robot is moving at a given speed or how many times the wheels rotate. This type of navigation sets-up well for working with ratios.

I thought the easiest way to start working with ratios and robots was to calculate how far the robot travels in one rotation. Students can do this by either programming the robot to travel one full rotation and measuring the distance traveled or through measuring the diameter of the wheel and then calculating the circumference of the wheel (this gives us a bonus geometry standard, CCSS.MATH.CONTENT.7.G.B.4). Once we have a baseline distance for one rotation we can calculate how far the robot will travel given the number of rotations.

But wat will we have the robot do? I went thrifting at Goodwill for inspiration and found this fantastic Hot Wheels Halloween Haunted House. So my idea is to have the robot go trick-or-treating. He will have to leave his home and go to the haunted house. But mama robot does not want little Delta out all hours of the night, so the robot’s programmer only gets three attempts to drive him right up to the door and say trick-or-treat.

The students will calculate the feet or centimeters per rotation of the robot, then set up the ratio: rotation/distance=rotations needed/distance to house (or any other iteration that works). Using this ratio, one can calculate quite accurately how to get the robot to stop right at the door of the house.

Here is a video of me explaining the basic activity:

Adding the house gives the student an intriguing storyline and mission. It makes the lesson more like play…and that is important.

At Goodwill, I also found a T-square, which will be very helpful in getting the robot to get off to a straight start (a constant challenge with these robots), and some balls for a yet to be determined purpose. I am excited about exploring what I can teach with the EV3. I am particularly interested in exploring the ways in which programming the EV3 make certain math and geometry concepts more tangible. 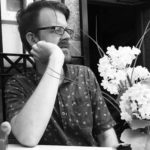 I am an instructional designer living in Grand Rapids, MI. I currently work for Michigan State University’s College of Veterinary Medicine. I also have 7 years higher ed teaching experience, as well as 2 1/2 years teaching K-8 academic intervention. I am fascinated with the process of learning and how we can creatively leverage what we know about how people learn with the